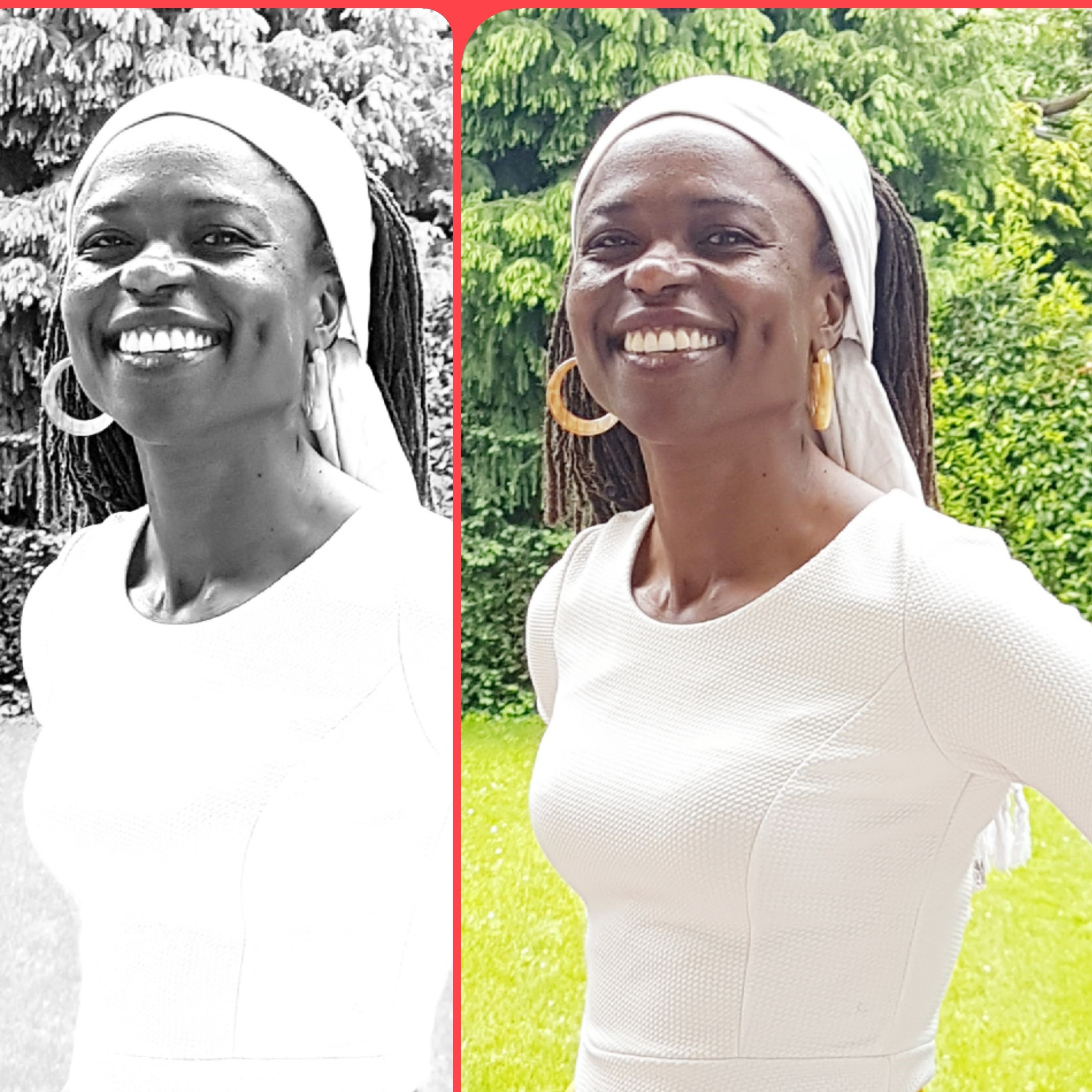 Or how we also inspire quietly.

In my keynotes’ series “#Diversity and the Magic in You” I intentionally quote my mother because she taught me (unconsciously and consciously) how to deal with diversity. I used to think that when relatives and neighbors called her “mother of girls,” it was a compliment. But it wasn’t.

“A world of contrasts” is what many reporters call the colorful life in Kenya. I call it diversity.

A, theme that is fashionable right now, but in fact is nothing new. I am still convinced that if dealing with diversity starts at home, and not only when we notice a gap in salaries between men and women in companies. If we fully understand this, we would be celebrating diversity together more often.

Today, I would love to share 7 learnings from my mother. A woman with 11 children, most of whom she raised alone. Her choice you might say. Yes, you are right. It’s not about acknowledging that. She holds herself responsible and that’s why there are no rooms for blame-games.

The article focuses on her tools.

Know your boundary, so you don’t keep on deciding. “If you don’t confine your circle of dignity clearly enough, you will have to rethink every tempting offer, every deal. That’s not just a big waste of time. It also erodes your self-respect and reputation – making you more vulnerable to future offers. A true vicious circle, in other words” – says Rolf Dobelli in his the book “The Art of Living Well.” – freely translated.

There were a number of issues that were simply non-negotiable for my mother. I was too shortsighted to understand some of her decisions. Now, with more life experience, I understand them more and more. When I lacked school fee, many voices came to her saying, “You need to report your husband,” “You need to look for another husband who can take care of you,” “You could promise your girls to someone.” Even though she only had us – the circle of trust was not that large – she maintained her dignity. She sharply defined her circle of dignity; the values within that circle were non-negotiable.

Our learning from this: diversity also means many opinions, which may be well-intentioned, but ultimately, you alone will have to live with the consequences. Define your boundaries. What is negotiable for you to fit in somewhere or what not?

2. Concentrate on topics that will bring you forward

If you have been to Kenya, you know how beautiful Kenyan women braid their hair. A masterpiece. But it also made us envious when we couldn’t afford it at the time.

When my mother got sick and therefore lost her job, when the situation became harder and harder, she decided to focus her energy on even less things. Whether her belly was full or empty, the sound of her knitting machine accompanied us day and night. Diligent, concentrated and focused, she worked hard for us. This meant no visiting hairstylists anymore, (luckily there are headscarves she always said), no sitting-on-the-veranda-and-gossiping visits like many women did, etc. She often said to us, “be aware of what is told around in the salons and how much time you would spend there”.

We’re not talking about 15 minute haircuts. That was a day’s investment.

Learning: when things get harder and harder, tighten up your activities and your circle. I, personally, work on this daily.

Take it with humor and encourage your kids and those around you As said before, “mother of girls” was not a compliment.

9 out of 11 of my mother’s children are girls. For us, it was great, for relatives and society a reason to mock my mother. “These girls are lost, growing up without a father…” we always heard.

My mother showed us her humorous side and called herself “Proud mother of girls”. If you admitted and accepted your situation, it would be difficult to hurt you with it. She continued to say to us “You, my girls, are the future” and gave us COURAGE.

Never did she show doubt, never did she say bad things about others. She took it in stride and made us fans. They told us about strong women in history and politics. She had fully accepted her role with pride and dignity and showed us that it was not an issue. “Let them talk,” she would say.

4. Build allies and fans. Today we would say, build a community

My mother was very committed to orphans, to children and young people who were in trouble from society’s point of view. She has the gift of listening. Of course, there were those who took advantage of her being nice, but she did not judge. As a worker in Homa-Bay, Kenya, she did not have the benefit of being integrated into the pension system.

Her investment in many children and youth, without expecting anything, always pays off now. Even up to date, she is never alone. Many come by and thank her for what she did years ago (her pension partially secured:-)) and she has thus built a strong and value centered community. We still feel this when we visit. Every time I am strongly touched by the impact such gestures has on people.

My learnings: remember, even if it looks like everyone is against you, you can build your community with patience. Someone will always be there for you.

5. Let others underestimate you. You do not have to prove your talents to everyone, but know when you are needed most.

In the old days, without social media, there was also this search for recognition. Sure, we were happy when someone said, “But you have beautiful girls.” My mother consciously took us together and said “Don’t put a lot of weight on appearances. What counts is what you think about yourself.”

She consistently followed this path. It wasn’t just us kids who totally underestimated her. But when it really mattered, she stood up for herself and her family, and even saved my father’s life in this way. When my mother used to live with my father in Nairobi, there was once a political unrest and all Luos (an ethnic group in Kenya) were visited by “opponents” with the aim of killing them, from door to door. Fortunately, my mother Swahili accent was excellent, so it didn’t seem to the “visitors” as if she were a Luo. She straightened up and explained that my father had been sick in bed for days, unable to speak, and in that way saved his life with a made-up story. That’s what I call strength. When it comes down to it, using your hidden talents.

6. Rituals help us to use the space between stimulus and reaction better.

This way you are not bitter even towards your “enemies Every evening we all met for a ritual and often fell asleep during it (please don’t tell anyone): singing together, studying selected chapters from the Bible (everyone had a turn to read) and interpreting them, getting down on our knees together and praying. I want to avoid emphasizing the religious aspect here, but rather the impact of this simple ritual. We had no space to complain. While praying we were simply grateful for ourselves, for health, and this prepared us mentally for what was to come. We were in this together we were a team.

Now and then we didn’t even have a candle. In such cases, we were also flexible to have everything ready before sunset so that we could lie down right after the evening prayer. Of course, I questioned this ritual as a teenager, only later did I understand the meaning. Looking back: in a house without television and electronics, that was the best entertainment. We even prayed for our “enemies.” So, I learned not to wish evil to anyone, not to be bitter and simply live by the motto “Two Wrongs do not make a right”.

7. If someone does not notice when you do something good, do it anyway.

This point is very much related to “Circle of Dignity”. Stand by your values whether you get credit for them or not. I remember how embarrassing it was for us to see my mother helping the sick and homeless, especially since we didn’t have “much” ourselves. Maybe we were just jealous because it meant we had even less.

She did one simple thing with great effect consistently: no matter where she was, at home or in strange places, she greeted everyone she met on the way. For me, as a child, that was embarrassing especially when someone didn’t answer.

I didn’t understand this habit until years later. She was considered the “friendliest neighbor” and made it easier for us to borrow for salt or sugar when we were short of something. She built a foundation for togetherness. Meanwhile, I do this when I go for a walk and annoy my kids with it, too.

Learning: Make the first step in terms of meeting other people and other cultures. Make it easier for your counterpart, even if it may come to the realization at the beginning “Thank God she speaks our language.”

Of course, I still question some of what she decided, but I deliberately take out the learnings and find it amazing and worth sharing that she has been consistent in her stance. She used to say “just wait until you have your household and your children”. I realize she was right.

If we create a healthy base at home, encountering other cultures, other people with other values will not be an issue. Dealing with diversity does not begin and end when we have “diversity managers” in the companies.

Living diversity means first knowing yourself and your values, defining your circle of dignity and taking the first step. And you? Who inspired you when growing up or even afterwards?

“SUSAN, THESE THINGS ARE STILL HAPPENING”.

“Do you have a plan”

We use cookies on our website to give you the most relevant experience by remembering your preferences and repeat visits. By clicking “Accept”, you consent to the use of ALL the cookies.
Cookie settingsACCEPT
Manage consent

This website uses cookies to improve your experience while you navigate through the website. Out of these, the cookies that are categorized as necessary are stored on your browser as they are essential for the working of basic functionalities of the website. We also use third-party cookies that help us analyze and understand how you use this website. These cookies will be stored in your browser only with your consent. You also have the option to opt-out of these cookies. But opting out of some of these cookies may affect your browsing experience.
Necessary Always Enabled
Necessary cookies are absolutely essential for the website to function properly. This category only includes cookies that ensures basic functionalities and security features of the website. These cookies do not store any personal information.
Non-necessary
Any cookies that may not be particularly necessary for the website to function and is used specifically to collect user personal data via analytics, ads, other embedded contents are termed as non-necessary cookies. It is mandatory to procure user consent prior to running these cookies on your website.
SAVE & ACCEPT